Filed under: Uncategorized — sleepbetterteam @ 11:37 am 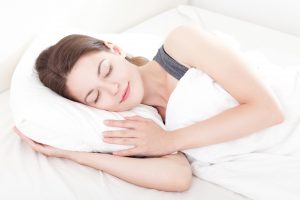 A good night’s sleep is critical to maintaining your overall health. In fact, poor sleep has been linked to weight gain, depression, and increased risk of heart disease and stroke among other negative health impacts.  Many people know that healthy adults require 7 to 9 hours of quality sleep each night, but do you know why? Here is everything you need to know about the body’s natural sleep cycles and how sleep apnea treatment in Wesley Chapel can restore restful sleep for those suffering from the disruptive condition.

What Happens When I Sleep?

When you shut your eyes and fall asleep, your body and brain do not go into a passive “shutdown” mode until your alarm clock rings the next morning. Instead, your brain goes through various patterns of activity made up of two distinct parts – Non-REM sleep and REM (or “Rapid Eye Movement”) cycles.

Here is a breakdown of what happens during each phase of sleep:

Sleep apnea is a condition that disrupts normal sleep cycles by causing patients to cease breathing for ten or more seconds at a time during the night. Sleep apnea can be caused by a blockage in the throat that prevents normal breathing, by the brain failing to signal the body to inhale and exhale or a combination of both causes.

Loud snoring is often the first indication that a person may be developing sleep apnea. Other common side effects of sleep apnea include:

Quality sleep is too important to your overall health to let sleep apnea interrupt your nightly rest. Talk to a dentist today about snoring treatment in Wesley Chapel to ensure you feel renewed and ready to take on the world when you wake up each morning.

Dr. Jay Nelson has over three decades of experience in helping patients achieve a healthy smile and restful, relaxing nights of sleep. He pursued extensive postgraduate training in dental sleep medicine and is a member of the American Sleep and Breathing Academy. If you think you may be suffering from sleep apnea, do not hesitate to contact Dr. Nelson via his website or by calling the office at 813-949-0424.

Sorry, the comment form is closed at this time.